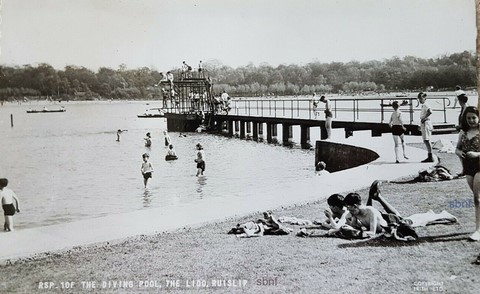 For Swimming (From a former lifeguard)
In my days, the 70’s, the chlorination plant was located in the main building overlooking the swimming ares, just inside the main pedestrian entrance.
There was a large “garage” which housed 4 large chlorine cylinders each probably 8ft long and 2.5ft in diameter which had to be winched into position by hand on an overhead gantry.
The plant was on the front of the building overlooking the lawn. Water was pumped out of the lake to the plant, where chlorine gas was mixed with the water in small mixing tanks, this was then pumped back through a 4” pipe which ran down under the pier and along the bottom of the swimming area. This pipe had holes in it which allowed he chlorinated water to flow out into the swimming area.
The pipe continued from the pier across the bottom of the lake to the beach, where it was attached to the bottom of the fence which, then enclosed the beach, chlorinating the water on the beach side.
Chlorine levels were tested an monitored on a daily basis and the gas flow could be regulated to maintain safe chlorine levels.
Guy
Tweet