On February 26th 1951 Mr Hester gave a lecture on swallow-holes to the Ruislip and District Natural History Society (which also included local historians at that date before the formation of the Ruislip, Northwood and Eastcote Local History Society) explaining that they were holes which appear in the ground, sometimes without warning, where chalk strata is close to the surface and cavities occurring in the chalk collapse.  He said that ten had been observed around the Reservoir in the last six or seven years [i.e. since 1944] and that three were present in Poor’s Field.  In what appear to be notes for a paper he says: “Over a period of six years I have observed nine swallow-holes along the northern and western sides of the Reservoir.  The largest of these seen in November 1944 was situated at the waters edge and a large amount of water from the Reservoir had disappeared down it.  Its dimensions were 15 feet long, 12 feet across and 10 feet deep.”  I think it significant that the swallow-holes did not occur until after water pumping started under Poor’s Field. In an article on the local geology in 1942 Mr Hester makes no mention of any such swallow-holes[iii] and I well remember the interest they were causing in the Natural History Society in the early 1950’s, as if they were still a novelty.
An interesting reference to a possible connection between pumping water from bore-holes and swallow-holes occurs in a reply letter to Mr Hester dated 25th March 1942 from a Mr F.K. Sinclair in connection with the Eastbury Pumping Station. “... I should doubt very much if you would be afforded any information about the system there, as the Company was violently attacked in 1927 by the Watford Corporation and other bodies, alleging that the pumping at that station was the cause of the subsidence which took place about that date in Kingsfield Rd., Oxhey, when a hole 70 feet deep opened in the front garden of a house.  The petitions which were lodged against the Colne Valley Water Bill 1927/8, mainly based on this matter, resulted in the Company withdrawing the whole of the proposals in the Bill for the sinking of further wells in the valley of the Colne.”  Could this have been the reason for the siting of the pumping stations on Ruislip Common?  Mr H. Wallhouse in his article in The Surveyor about the project says, “The site was, in fact, largely dictated by political necessities, the intricacies of which are outside the scope of this paper”.

It all happens again, with some curious results.

In a postscript to an article in the Society’s Journal for 1991, I mentioned that because of continued lack of rain following the partial draining of the Lido in early 1990 to allow repair work in the swimming area, it had been impossible to refill it by natural means in time for a charity event in July.  Water was therefore pumped from the now disused well that penetrates 300 feet deep into the chalk under Poor’s Field.  The sound of the pump chugging away night and day continued for many days, but eventually the water-level in the Lido was up again.  Never had I seen the water so clear, clean and limpid.  The day was saved!  But the bore-hole had been activated again and in the summer of 1991 a very large swallow-hole opened up on the western edge of the Lido and swallowed-up a large amount of Lido water. 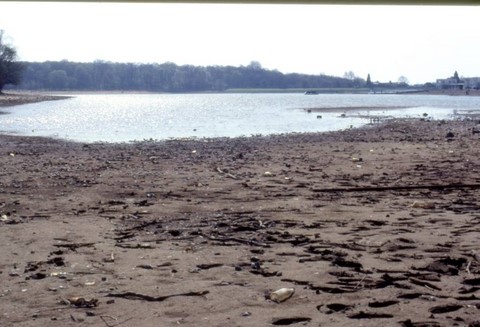 Hillingdon Borough had let the Lido to a private company calling itself Eau Naturelle in February 1991, with a view to granting the company a 99-year lease from October 1991.  There was ferocious public opposition as the company was planning mega concerts by the waterside and was even considering organising War Games in Park Wood.  Council officers and the directors of Eau Naturelle suffered a withering attack at a public meeting held in a marquee at the Lido in August 1991.  The swallow-hole had opened up about a month before and the Council were beginning to rue their decision.  Council officers seeking a contractor to fill in the hole were given estimates of £70,000 and upwards.  To minimise costs the Council agreed to pay Eau Naturelle’s rates of £22,000, if the company would take over responsibility for the hole.  In the event the company paid David Cokeley just one pound and he did a deal with the National Rivers Authority who paid him for the right to dump clay which was being dug out of the Yeading Brook’s flood alleviation works[iv].  The site of the swallow hole is shown on figure 2.
The low water level stopped the dinghy sailing and curtailed the water skiing and put a blight on Eau Naturelle’s plans.  The company agreed to share the costs of restoring water levels with the Council, but about this stage the Borough Engineer decided, for entirely unrelated reasons, that the level of the water in the Lido should be kept permanently low.  This was to contain a possible massive cloud burst (risk: once in a hundred years) which might otherwise flood houses which had been built downstream on the bed of the Canal Feeder.  The Feeder stream had been diverted into the bed of the Canon Brook.
Another trouble for Eau Naturelle was that lorry loads of clay and even rubble kept being dumped in the Lido even when the swallow hole had been filled.  This was just the chance the Council were waiting for.  Eau Naturelle had breached their contract and were ordered to leave in June 1992[v].  The Lido management was put out to tender again in December 1992, but the Lido site lay derelict for a couple of years before an arrangement was made with the Whitbread Breweries in 1994 to build a family restaurant and renew facilities[vi].  In the interim the Art Deco building had not been properly protected and was set on fire in June 1993 and demolished in March 1994[vii].  Whitbread’s Waterside Restaurant opened in August 1996, faintly echoing the lines of the original 1935 Lido building.
The former Reservoir never was allowed to fill up. The Council were too afraid of that once in a hundred year flood and the compensation implications.  The sailing boats have not returned and the muddy exposed edges have become covered with grass and developing scrub.  Things have changed, but who would guess that it all started with a bore hole.
FIG 2  Ruislip Lido Jan 1993, showing the site of the 1991 swallow hole. 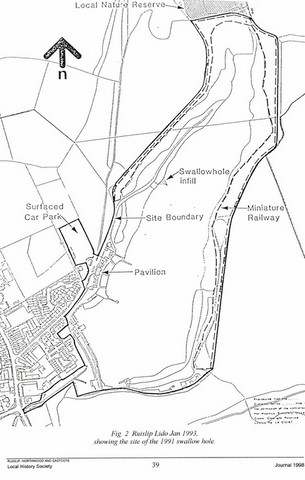