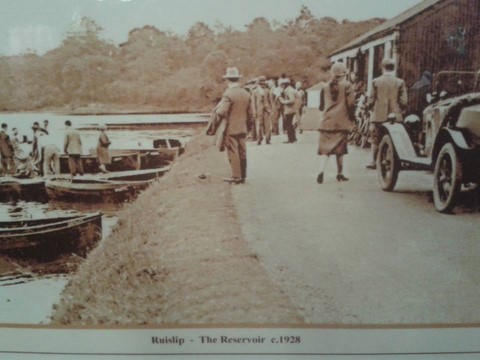 The reservoir at Ruislip was built by The Grand Junction Canal Company in 1811.

Before it coming in to existence the area was common land and there also stood a group of cottages known as Park Herne, the foundation of which would be visible were it to be drained.
Having purchased common land from the Enclosure Commissioners the General Committee of the Canal Company then has to negotiate with King's College for a piece of Park Wood and with the owners of the cottages at Park Herne.
The lessees for the College valued the woodland at £65 an acre whereas the Canal Company thought the value to be more like £25 an acre.
The negotiations went on for two years but eventually The Grand Junction Canal Company, in February 1807 paid a little over £1,000 for a little over 35 acres. This was broken down as 10 acres at £45 and 25 acres at £24. It is assumed the valuation per acre reflected on how much timber was grown on each parcel of land. The woods were actually leased to messers David and James for wood production and they were compensated to the tune of £77 for their loss.
The Canal Company also faced opposition to the project for a Mr Henry Golder who owned one of the cottages at Park Herne who refused to sell to them at seemingly any price and other owners held off selling for better terms than those offered Eventually Henry Golder and a Mr Robert Lively sold out to another cottage owner, John Dean in the summer of 1807. This allowed the company to complete the acquisition of all the cottages as follows:
£210 to Re. William Blencowe for a cottage and 1.5 acres.
£100 to Daniel Hill for a cottage and 0.13 of an acre.
£250 to John Dean for three cottages and 5.5 acres.
Between 1807 and construction starting the property was all let out but in 1811 the work started. John Rennie was the consulting engineer and the constructor was Hugh Mackintosh.
Construction took less than a year (mainly the large dam at one end) and on 5th December 1811 John Rennie reported to the general meeting of the committee of management of the Grand Junction Waterworks Company as follows "The reservoir at Ruislip has now been completed and although doubts were entertained with respect to its capability of being filled with water owing to an extensive bed of sand which was found near to its head, yest this has answered the most sanguine wishes as it is now nearly full of water and from the latest accounts transmitted to me there is no appearance of any leakage in it".
The Grand Junction Canal Company were contracted to supply piped water from the canal to the inhabitants of Paddington in 1798 and an act of parliament in 1811 transferred these powers to the Grand Junction Waterworks Company. It was the waterworks company that actually were the builders of the reservoir.
It was not until 1813 that the feeder to the canal was conceived, the delay one can only assume was to make sure the reservoir held water before undertaking more building works.
The route was to cross Ruislip, down towards Northolt, then over to Yeading and finally entering the canal at Hayes Bridge a little over 7 miles away and (obviously) and downward slope along the entire length.
The land for it has to be purchased from many owners which in itself took time and construction of the feeder did not actually start until February 1816 and it first ran in water in early June that year. Much of the construction was a shallow indent in the ground. However, near Woodfield Gardens in Ruislip an aqueduct was built to carry the feeder over the River Pinn and this still stands to this day (2021) but is in poor condition.
Sadly it was not a success, the feeder collected drainage and flood water from land on each side and this contaminated both the canal and, by dint, the drinking water for Paddington.
The reservoir was not very successful either as it was too shallow to perform as it was intended and ceased being a feeder to the canal in 1851, so served as a canal feeder for just 35 years.
Standing idle for many years in the late 1930's The Grand Union Canal Company (a re-named Grand Junction Canal Company in effect) began to develop it as a lido with boating, fishing and swimming. The canal companys were nationalised in 1951 and ownership was transferred to the Ruislip and Northwood Urban District Council in that year.
You should now go to this page to read more on the development.
Tweet